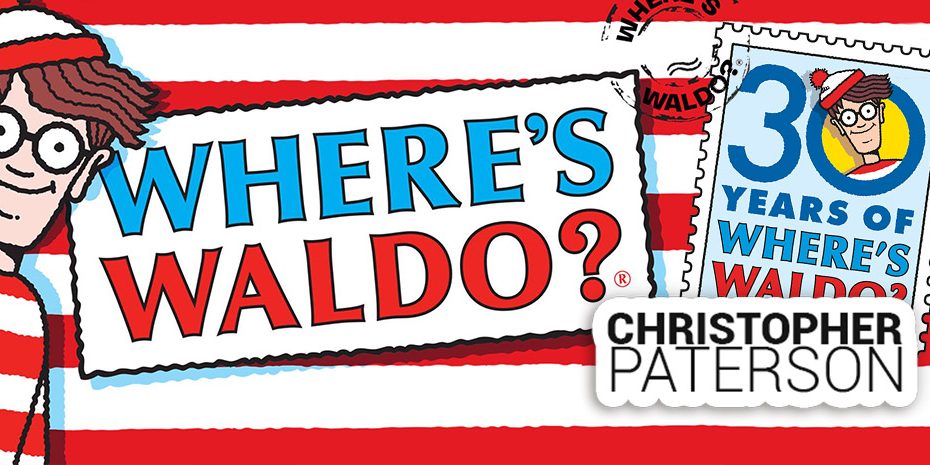 Give this man a GPS tracker……..

This July 2017 the book series “Where’s Waldo“ celebrates another anniversary milestone hitting 30 years young. What a year to be celebrating it when Canada hits it’s 150 birthday milestone. The Waldo character is known for his distinct proud Canadian shirt of a red and white stripes, blue jeans, brown boots, red and white striped socks, glasses, and his red and white hat. Walso has traveled all over the world, through time, and to distant wild and crazy lands…also in the company of his many friend. So why are we always searching for this man?….Let’s look at his design….

Waldo is the star of the “Where’s Waldo?” series. The character is known for his distinct wardrobe of a red and white striped shirt, blue jeans, brown boots, red and white striped socks, glasses, and his red and white bobbled hat. He has traveled all over the world, through time, and to distant magical lands. Waldo is more commonly known as Wally since his name was changed in the 21st century.

Waldo isn’t the only one like him; he comes from the Land of Waldos, which is a land filled with Waldos just like him. Waldo is always ready for an adventure with his walking stick in hand, and trusty dog Woof by his side. His favorite hobbies are reading and collecting things from his many travels. The character’s age is unknown and his height is described as “tallish” and weight as “lightish”. Waldo has a happy-go-lucky attitude and is often seen with a smile on his face. Waldo first appeared in 1987 in the book Where’s Waldo?. Over the years Waldo’s appearance changed only slightly. He is called Waldo only in the USA but in the UK and South Africa, he’s called Wally.

As more books were released the cast of characters grew as well – including Wizard Whitebeard, Wilma, Wenda, Woof, Odlaw and the Waldo Watchers. More Waldo books followed – such as Where’s Waldo in Hollywood, The Wonder Book and The Great Picture Hunt!.
Waldo soon became a huge pop-culture sensation in the early 1990s. The world was swept with “Waldo-mania”. The franchise grew to include video games, books, magazines, toys, comics, and even an animated television series.

The magical Wizard Whitebeard often visits Waldo with one of his many magical scrolls (something he always ends up losing). The Wizard is recognizable by his red robe, blue hat, long white beard, and his striped staff. Whitebeard is the one with the magic that allows Waldo and his friends to travel to all the magical and far off lands. While there are rumors stating that he is the father of Wenda, these have not been confirmed and are not considered canon.

Wizard Whitebeard first appeared in 1989 in the book The Great Waldo Search.

Wilma was Waldo’s girlfriend. She was a short-lived Waldo character, only appearing in two books (The Ultimate Fun Book and The Magnificent Poster Book). She was the original owner of Woof the dog.

Like Waldo, Wilma wrote postcards. They were often to the reader or Waldo, and were sent with her own photo-stamp (similar to Waldo). She introduced herself in The Ultimate Fun book saying:

…My name is Wilma and from now on I’m going to going wherever you go. Just for fun, of course! Have you noticed me yet, have you spotted me in the crowd?…And have you met my dog Woof? Oh wow, actually where is he?…

Wenda is Waldo’s current girlfriend. The character is the “one who takes the pictures” according to the intro of The Wonder Book, but she always loses her camera. Wenda was featured in the Where’s Waldo? television series, in the episode The Living Exhibits.

Woof is Waldo’s dog and good friend. Woof originally belonged to Wilma, but over the years became Waldo’s dog. Woof comes from the Land of Woofs, which is a land full of dogs like him. Like his owner, Woof sports a red and white bobbled hat, glasses, and a red and white striped suit. Woof sets off with Waldo on his travels with his bone, but always seems to lose it. Woof is shy and easily scared. He gets so scared at many of the places he travels to that he hides, leaving only his tail showing. In the classic Waldo Books, only Woof’s tail can be spotted.

Odlaw is a character of the “Where’s Waldo?” series. He is “mean, nasty, loathsome, and disgusting.” His number of good deeds are few and all he cares about is getting his hands on Waldo’s magic walking stick. His wardrobe includes a black and yellow striped shirt, black jeans, boots, dark glasses, yellow and black bobbled hat, and a slick moustache. Odlaw seems to be something of an evil twin to Waldo, and it is later confirmed by the revelation that he comes from Odlaw’s Swamp in remote Maine, where hundreds of other Odlaws live, which is a parallel to the Land of Waldos. Odlaw can be really clumsy, so he always ends up getting hurt. His friends also tell him to frequently “Shut Up” and stop writing “Odlaw wuz here” on everything with which he comes in contact–because, seriously, tagging yourself in your own Facebook comments is pretty lame, Odlaw. -> THIS. The trolling is strong with this one. He is reportedly based on a young boy that illustrator Martin Handford met in Portland, Maine during a hunting trip.

Odlaw’s name comes from “Waldo” spelled backwards. He first appeared in 1991 in the book Where’s Waldo: The Magnificent Poster Book! where his role was like an “Anti-Waldo”.

Waldo Watcher is the term used to describe the followers and fans of Waldo. They dress like Waldo – red and white striped shirt, blue pants, boots, red and white striped socks, and a red and white bobbled hat. They are usually kids (both boys and girls) and they travel where ever Waldo does. They too, get lost on Waldo’s travels as they try to keep up with their idol. While Waldo has never actually interacted with the watchers in the books, authors of Where’s Waldo fan fiction have gone into the subject in great detail.

All images courtesy of Waldo.wikia.com