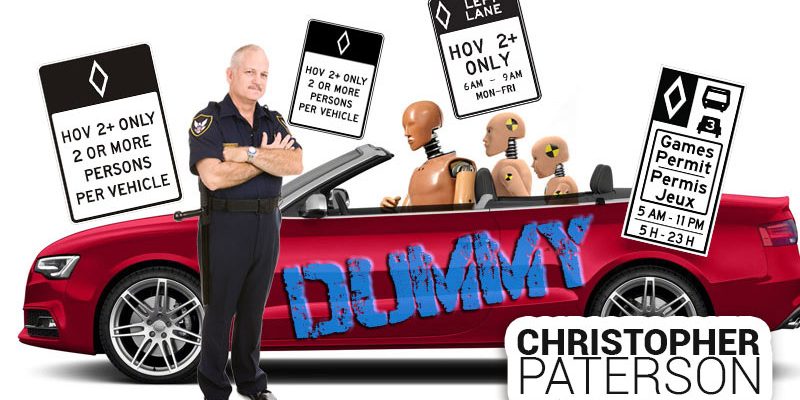 Toronto Police nabbed a man Wednesday morning using dummies as passengers while driving in lane temporarily designated for high-occupancy vehicles during the Pan Am Games. Why was he stopped? Lets take a look at this design.

Police say they spotted the man’s Dodge pick-up truck traveling eastbound on the Gardiner Expressway in the HOV lane with two passengers on Wednesday at 8:50 a.m.The Dodge was following the new HOV rule of having a total of three people in the vehicle – or so it appeared…..But only one person in the car wasn’t made out of plastic.

The officer noticed that the front seat passenger did not appear to be “life-like.”That was because it was a very well dressed mannequin. The driver was charged with the appropriate HOV offence. The other dummies well, they were…..Ummmm….Aa….sent off to Walmart to have a life sentence wearing those ” fashionable designer” clothes.

Please remember under the Highway Traffic Act (HTA), the fine for incorrect use of HOV lanes on highways is $110 plus three demerit points. The Gardiner and DVP aren’t considered highways under the HTA resulting in a of $85 fine without demerit points attached. But please don’t do this……don’t be a dummy.

Lets look at other drivers who have done the same thing.

So remember, STOP….and don’t be a dummy!