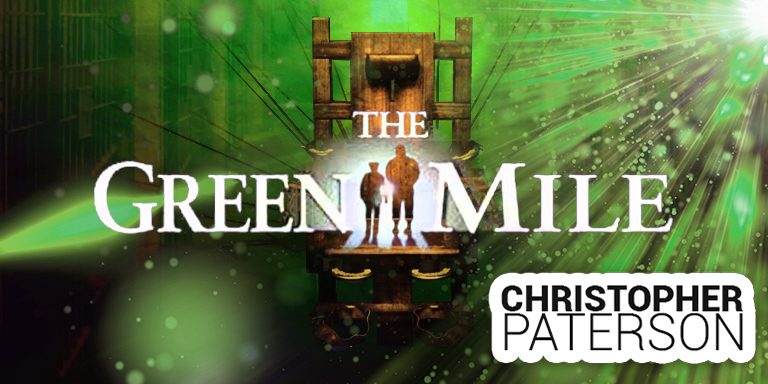 You can’t hide what’s in your heart.

“The Green Mile” is a 1999 American fantasy crime drama film directed by Frank Darabont and adapted from the 1996 Stephen King novel. The film is told in a flashback format and stars Tom Hanks as Paul Edgecomb and Michael Clarke Duncan as John Coffey. The film tells the story of Paul’s life as a death row corrections officer during the Great Depression in the United States, and the supernatural events he witnessed. But it’s also provide us with hidden messages….lets look at the hidden design of the movie.

This movie contains great content but also contains literary parallels. Essentially when we dive down really deep and break this story apart we can say this a recreation of the Biblical Jesus story. John Coffey=Jesus Christ. John Coffey is a man who is innocent, he has not sinned, and he has special powers, and he is put on death row and condemned to die.

The phrase at the end of the movie, “That’s my punishment, for killing one of God’s miracles.” The same story is retold of one of the guards who killed Christ and was condemned into not dying. Just like the Biblical figure of God, John punishes and he saves. John tears down and he builds up. It is the story of the underdog…of the person who has done nothing but is condemned by society. But what can this movie offer to people in today’s world? Those who don’t believe in God or Jesus Christ…..

When we break down particular phrases in this movie we realize that maybe this movie is also a pleading to the people of today. John Coffey says “I’m tired, boss. Tired of bein’ on the road, lonely as a sparrow in the rain. Tired of not ever having me a buddy to be with, or tell me where we’s coming from or going to, or why. Mostly I’m tired of people being ugly to each other. I’m tired of all the pain I feel and hear in the world everyday. There’s too much of it.” I’m sure in today’s world there are many people who can sympathize with John. Our world almost has become saturated with cloudy negativity, hate, judgement, and most of all lacking compassion and love for others……

Everyone on this world has a story to tell, we can all either judge by looks, believe the lies we are told by others or we can TRULY OPEN OUR OWN EYES….. John essentially showed Paul and the other guards his gifts and what he’s capable of, is that why they believed? Possibly….Or did it take John to reach out and grab Paul’s hand, giving him the power to actually see what John saw to truly believe? Either way….to truly understand someone we need to be put ourself in their shoes…essentially reaching out to really understand someone.

We all have the power to put people in the dark ( cover them with a hood ) or we can find and help those people wondering in the dark and bring them back into the light.