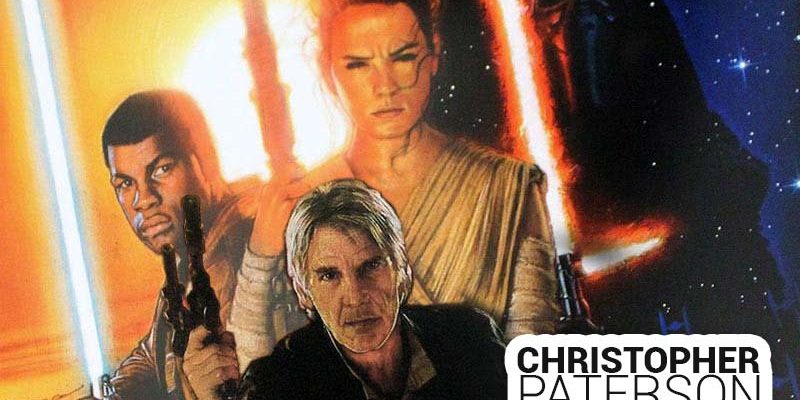 A new movie poster for The Force Awakens, released to attendees at Disney’s massive D23 convention. The poster was created by artist Drew Struzan, whose famous style has graced posters for the other films in the Star Wars saga as well as the Indiana Jones films. While Struzan created this poster, it is not the primary poster he’ll make for the film — this is a promotional poster for attendees at the D23 Expo on Saturday. But wait….does this poster have any other spoilers? Lets look at  the poster and look at this design….

This poster also gives us a bit of new information about the plot. John Boyega’s character, Finn, will apparently be a Jedi — this is the first time we’ve seen his character wielding a lightsaber, the weapon of the Jedi…..but we’ve seen him before as a Storm trooper running in the desert….why does he have this lightsaber?

The title force awakens can mean many different meanings….

1. It could be the title of movie franchise that is awakening after so many years without another sequel or prequel.

2. Maybe bad can convert? What if evil magically turns into good? What if a storm troopers senses awaken and start to become good? Was Finn running away from the darkside? Has his midichlorians awaken?

3. Maybe we have no idea what we are talking about and are reaching out for answers…. either way….Star Wars can’t come quick enough!!