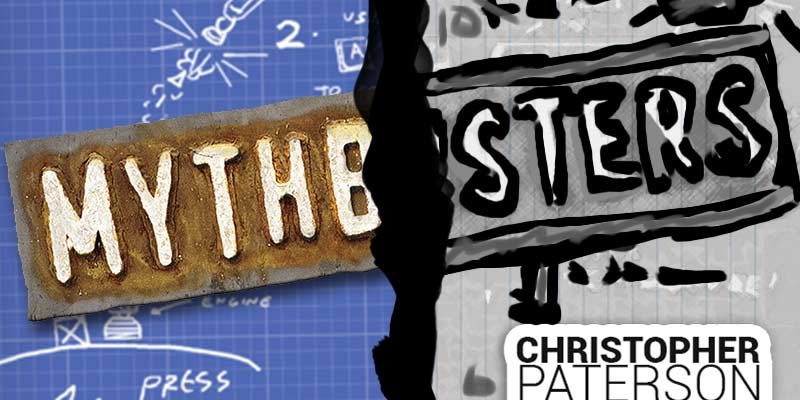 Mythbusters is a science entertainment television program created on January 23, 2003 and ran until March 6, 2016. The show’s stars special effects experts Adam Savage and Jamie Hyneman. Both hosts use elements of the scientific method to test the validity of rumours, myths, movie scenes, adages, Internet videos, and news stories. This show has not only been a huge inspiration to me….but it also has formed the way I grew up. Adam Savage and Jamie Hyneman are both my absolutely heroes and the celebrities I most would love to meet; From Adam’s unique spark of creativity in creating anything…..to Jamie’s methodical approach to creating something strong and tough. I have adapted both of their styles in my work today, and I’m proud to say it’s from watching and learning from them that my style has developed…..and it’s said to see such an inspirational show go off the air.

With all that being said, I wanted to pay tribute to the Mythbusters, so I decided to create their LOGO! Here’s my design!

So I recreated their logo, but of course I did my own flare….I made the rust more of a beautiful rich red, some drips and cracks….but still keeping the logo with those beautiful weathered yellow tinge of oxidization. I also created the font to be a little bigger as well.

I’m going to definitely miss this show……Thank-you Mythbusters for not only sparking the inner creative/resourceful person in me but for making me believe you can create anything you put your mind to.