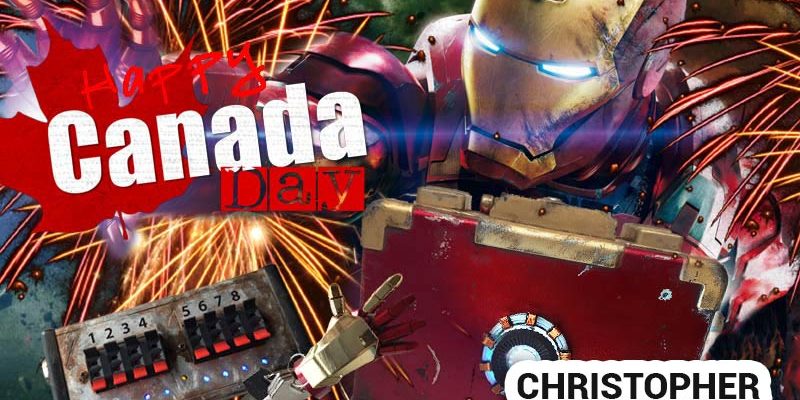 Is it better to be feared or respected? I say, is it too much to ask for both?

I’ve always had a fascination with Iron man since watching it. Since technology is my friend, I decided to make something a little high tech to launch fireworks with. Rather then making something ordinary, I went all out…..building something extraordinary. In the future I hope to make my own software running Jarvis where you can give commands over Bluetooth launching fireworks.

The photos below basically show the outside of the launcher. I’d say the hardest part was to finally make my mind up to battle damage it. Granted, and extremely fun and satisfying process, but knowing there was no “undo” button made it a little difficult, but HEY….weathering is SUPER FUN!

Inside the box, I made several decisions which I will revise later. I was trying to hurry to quickly make this for Canada Day/4th of July. So going back to add a little more rub and buff on in the inside and make the rust a little more crusty with layers is a must.

The top switches control the bluetooth speakers. One for Jarvis and the other for another device. I used one speaker for Jarvis while I ran the other bluetooth from my phone running “Shoot to Thrill” or any other ACDC Ironman inspired soundtracks while shooting off fireworks.

The launcher is quite easy; push the button designated to the appropriate firework on the launch pad. However, I have a secret built in. The two little black buttons on the bottom of the firework look ordinary, but once pushed at the same time launch a fury of fireworks. 1-8 get launched at the same time, I call it “The Jericho” or “Operation Clean Slate” Either way, they launch everything at the same time with a flying barrage of colours. Once activated the two blue project boxes at the side are lite up with LED’s indicating it has been pushed.

Over near the fireworks is the actual device you connect your fireworks to with an E-match. These are all stored in the Stark Industries wooden crate box.

Did I forget to say this whole thing requires keys to turn on. Yeah, just a little safety feature. No messes when trying to set things up near the launchpad.

At night, this thing looks even more beautiful then you can imagine. Did I forget to say the arc reactor in the front serves as a extremely bright light to see. So setting everything up is easy, stand the box upright I have a little tilt switch that activates it. So that means walking while holding the case at night would mean a super bright path to light up the way. Also an easy light to see what you’re doing when setting up the fireworks.