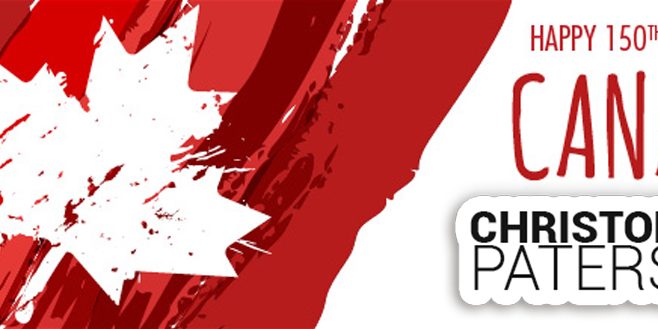 PROUD TO BE CANADIAN!

HAPPY 150th Birthday Canada! Today is the day to celebrate, but why? WHY NOT!…here is a little background “design” about Canada and this special day!

The British North America Act uniting the four provinces was drafted in London, England, by the “Fathers of Confederation.” The legislation received Royal Assent on March 29, 1867, coming into effect on July 1, 1867.

Q: Where does the name Canada come from?

A: The most accepted theory is that a St. Lawrence Iroquoian tribe who encountered French explorer Jacques Cartier used the word ‘kanata’ which in their language meant village or settlement. Cartier in his writings wrote ‘Canada,’ to reference not only the village he was directed to but the entire area.

Q: How large is Canada?

FACT: Canada has more lakes than all the other countries in the world combined!

Q: What are Canada’s official languages?

A: English and French. English is spoken across the country while in the province of Quebec, 80% of the province’s population are native Francophones. 95% of the people of the province speak French as their first or second language. The City of Montreal in Quebec is the 4th largest French-speaking city in the world (after Paris, Kinshasa, and Abidjan).

Q: What is the population of Canada and where do most Canadians live?

A: At 35,152,000, Canada’s population is roughly one-ninth of the adjacent United States. 82% of Canada’s population resides in large and medium size cities. Approximately 75% of the country’s population lives within 160 km (100 miles) of the United States. This does not include the 1.254 million folks living in the High River-Millarville-Calgary area where Heartland is filmed. The distance from this area to the Montana (U.S.) border is 328 km (204 miles).

Q: What is Canada’s motto?

A: It is Latin for “From Sea to Sea” – A Mari Usque Ad Mare. From a Heartland perspective, it’s nice to see “Mare” in there (I crack myself up!).

Q: What are prominent symbols associated with Canada?

A: There are a few. First and foremost is the Maple Leaf, which is prominently located on the Canadian flag. There are ten varieties of maple trees that grow in Canada but it is tough to locate any in Alberta.

FACT: The maple leaf on the Canadian flag has 11 points but they carry no special significance. The design was chosen after wind tunnel tests found the 11-point leaf was the least blurry when tested under the high wind conditions.

Other symbols of Canada include the beaver, the Canada goose, the common loon, and the federal and national police force of our country, the Royal Canadian Mounted Police, or the Mounties, which are readily recognized internationally by their dress uniforms with their bright red tunics. The photo at the top of this page is from episode 705: Thread the Needle, when The RCMP Musical Ride participated in a Heartland episode.

Q: What is Canada’s national sport?

Q: Is it true if you write Santa Claus from anywhere you will get a reply from Canada?

A: Yep. Write in any language and address your card or letter to: NORTH POLE, H0H 0H0, Canada and watch what happens (I think Santa doesn’t work during the summer months; he was spotted last week taking selfies with some elves in front of Maggie’s Diner in High River).

Q: Is it true Canada has the majority of the world’s polar bears?

FACT: The vehicle license plates for the Northwest Territories are in the shape of a polar bear.

Q: Why does Heartland air on CBC at 7:00 pm everywhere but Newfoundland and why does it air there at 7:30 pm?

A: The island of Newfoundland is located east of the other Maritime Provinces (Prince Edward Island, Nova Scotia and New Brunswick). In order to have the sun rise and set at roughly the same time as every other province in the country, the special half-hour time zone was allotted to the province. So when it’s 7:30 pm Sunday in Newfoundland Heartland airs on CBC at exactly the same time as it airs in the other Maritime Provinces, even though it starts at 7:00 pm there.