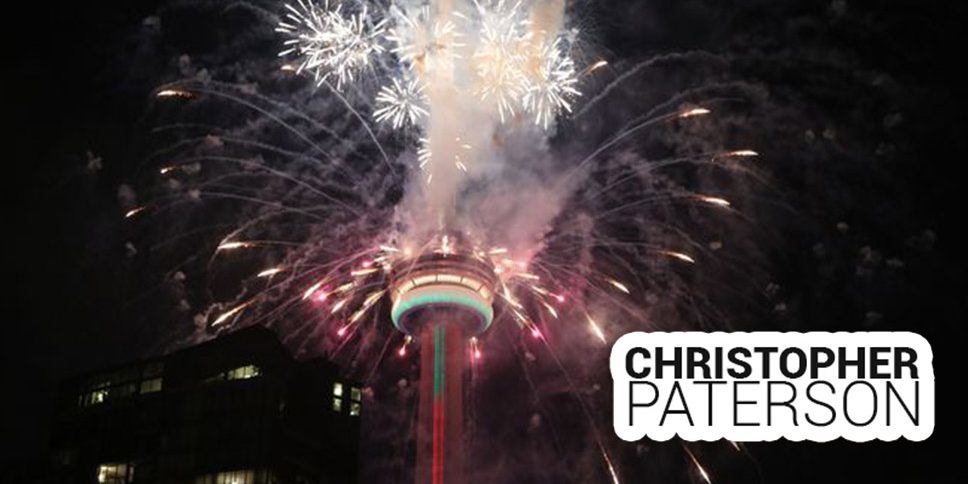 A Tower Worth Celebrating

After 40 months of construction, with more than 1,500 labourers working around the clock, five days a week, the CN Tower was officially unveiled on June 26, 1976.

Sunday marks 40 years to the day Canada’s tallest — and arguably most iconic — landmark opened its doors to the public with a midnight ribbon-cutting ceremony.

At the time, the 553.33-metre skyscraper was the world’s tallest free-standing structure and it would cling to the title for over three decades.

Having since been surpassed by other buildings like the Canton Tower in Guanghzou, China and the Tokyo Skytree in Japan, the structure still boasts a few other lofty titles.

According to the Guinness Book of World Records, it is home to the “world’s highest wine cellar” and the “highest external walk on a building,” thanks to the EdgeWalk.

Here are a few other lesser-known facts about the scepter of the 6ix you might not hear everyday.

1. A helicopter named Olga that was meant to secure the 44 pieces of the CN Tower’s 102-metre antennae nearly destroyed the building. While it was securing the first piece, the chopper got stuck. Steel workers hurried to unhinge the aircraft by burning off the bolts attached to the beam it was carrying. They narrowly avoided sending the structure into a downward spiral.

2. Speaking of safety, it doesn’t seem harnesses were of paramount importance for all of the workers. Earlier this month, painter Tony Tracy told the Star that while working on the CN Tower in the 70s he “had a safety strap but there was nothing to tie it to, really.”

3. One of the CN Tower’s principle architects, Australian John Hamilton Andrews, had a career breakthrough in the 60s working on Scarborough College (now the University of Toronto Scarborough). He also put in a bid to design Toronto City Hall, but got rejected.

5. The tower’s taken on many other uses however, attracting an estimated 1.5 million tourists every year. Many dine in the sky at the tower’s rotating 360 restaurant, watch a movie at the Maple Leaf Cinema and some have even gotten married amidst the clouds.

6. The CN Tower gets lit up for plenty of occasions, whether it’s red, white and blue to commemorate the Paris massacre or a full rainbow for Pride Month. It’s all thanks to digital controls that can assure 16.7 million colours shine from the steel and concrete skyscraper on any given night.

8. According to CBC Archives, the CN Tower’s original design plans suggested three towers ought to be built and connected by bridges, instead of the single skyscraper.

9. If you’re craving a very vertical workout, climbing to the top of the tower means scaling 1,776 stairs. For a more relaxed trip, take one of the eight elevators, which accommodate about 1,200 rides on a summer day.

10. Nearly 500,000 people have scaled the structure for charities like the United Way and the World Wildlife Fund. Others opted for more daring dismounts. Dar Robinson jumped off the CN Tower in 1979 while working as a stunt double for Christopher Plummer in the movie Highpoint. More recently, a group of French BASE jumpers took the plunge in 2015 for a promotional video for the Pan Am Games.