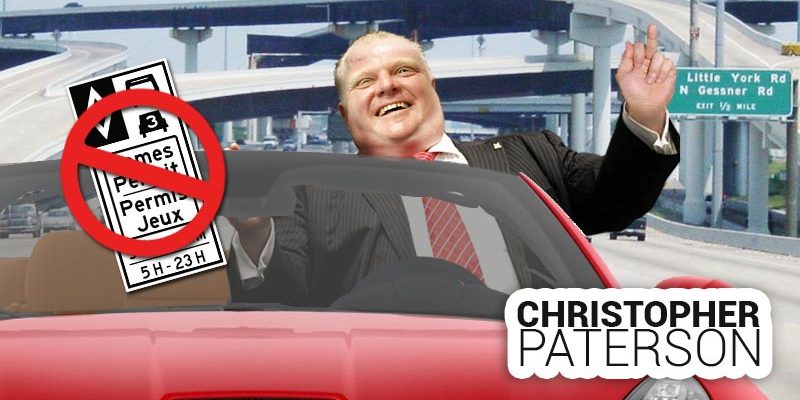 Rob Ford says he has been illegally using the temporary HOV lanes while driving alone despite a vigorous campaign by police to get residents to respect the laws governing the use of the lanes. Lets take a look at this”flawed” design…..

Ordinarily HOV lanes can be used by any vehicle with two or more people inside but the temporary lanes put in place for the Pan American Games are only open to accredited games vehicles, public transit vehicles, taxis, emergency vehicles and vehicles with three or more people.

The HOV lanes run along the Queen Elizabeth Way, the Gardiner Expressway, Lake Shore Boulevard, Jane Street south of Highway 407 and highways 401, 427 and 404.

“I have to get down here (city hall) sometimes, so if Dundas or King and Queen are too busy, absolutely (I use the lanes). You have to watch the cops over your shoulder and just sort of bob and weave,” Ford said. “Those things are a pain in the rear end.”

Speaking with reporters during a break in a council meeting, Ford said that he isn’t the only one improperly using the lanes and has no qualms about doing so, despite the warnings from police.
“It’s not just me a lot of people have,” he said. “I have to get where I have to go.”